I am interested in the analysis and systematic interconnection of phenomena like reification, ideology, domination, oppression and power; as well as in the methodology of social critique. Much of my work centers around the idea that the main forms of domination and oppression in contemporary society are best described on the level of normative social practices that institute inequality not only on the level of outcomes, but also on the level of internal normative authority within those practices. I am currently working on a number of essays that make this systematic claim. In addition, I think that a theory of social practices can also recover valuable insights from classic theories of ideology. Ideology, on such an account, is not merely a cognitive mistake. Rather, as the vocabularies in which we frame our beliefs are an expression of socially shared distinctions, oppressive practices will often find their expression in limiting and distorting vocabularies. Finally, much of my already published work deals with the method of immanent critique, that is, the idea that critical theories do not use standards that are external to the social practices they criticize but refer to their immanent potentialities.

The Metaethics of Critical Theories

Critical theories, from their beginning in Marx's philosophy to the Frankfurt School with its different generations, have always been …
Titus Stahl
Project

Habermas and the Project of Immanent Critique

According to Jürgen Habermas, his Theory of Communicative Action offers a new account of the normative foundations of critical theory.1 …
Titus Stahl
Project DOI

What Is Immanent Critique? 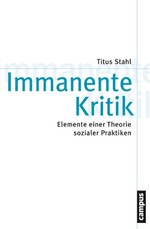